NYSCP Be Aware Parents and Carers- What is exploitation? - North Yorkshire

Be Aware Parents and Carers- What is exploitation?

Child exploitation: What does it mean?

Exploitation is a type of child abuse, it is never the fault of the child. It is often characterised by an imbalance of power, exchange and (the restriction or absence of) consent.

Exploitation occurs where an individual or group takes advantage of an imbalance of power to coerce, control, manipulate or deceive a child (under the age of 18 years):

(a) in exchange for something the victim needs or wants and/or
(b) for the financial advantage or increased status of the perpetrator or facilitator.

Money, gifts, accommodation, affection, status, food, drugs or alcohol may be freely given to the child but then they will be expected to engage in sexual and/or criminal activities in return.

Exploitation is where a person (adult or peer) or group forces, tricks or manipulates a child into doing something for them.

Money, gifts, accommodation, affection, attention, status, food, drugs or alcohol may be given to the child but then they will be expected to engage in sexual and/or criminal activities in return. The child often trusts the person exploiting them and may not know that what is happening to them is exploitation.

A child may be being exploited even if they appear to agree to the activity. They may be scared of what will happen if they do not do what their abuser says.

Sometimes young people can be used to exploit other children through peer groups or gangs.

It is a serious crime and the young people and families around them are victims, even if they may not recognise themselves as such.

Child exploitation is complex; there are many different elements and often more that one can be happening at any one time. Click below to learn about the different types of exploitation. Further information about some of the language and terminology used around exploitation can be found on our Jargon Buster page.

Child Criminal Exploitation (CCE) is when a child or young person is groomed by being given things, like gifts, drugs, money, status, attention and affection. This is usually in exchange for carrying out a criminal activity for the benefit of the adult or peer carrying out the abuse. County Lines is a form of child criminal exploitation in which abuser grooms and manipulate children into drug dealing. The ‘line’ refers to the mobile phone line which is used to control the young person delivering and selling the drugs.

More information can be found at the Children’s Society by clicking here.

Child Sexual Exploitation (CSE) is a type of sexual abuse. It happens when children and young people are tricked into doing something sexual; sometimes receiving something in return like love, affection, money, drugs or alcohol. This can happen face to face but also online; where children can be persuaded or forced to send or post sexually explicit images of themselves, film or stream sexual activities or have sexual conversations.

More information can be found a the NSPCC by clicking here.

Trafficking is where children and young people are tricked, forced or persuaded to be moved or transported and then exploited, forced to work, perform criminal or sexual activities, or sold. Trafficking can occur anywhere a young person is moved or transported regardless of the distance they are moved (not just across countries or counties).
Children can be trafficked for:
– sexual and criminal exploitation
– benefit fraud
– forced marriage
– domestic slavery like cleaning, cooking and childcare
– forced labour in factories or agriculture
– committing crimes, like theft, working on cannabis farms or moving drugs

Modern Slavery is the exploitation of people who have been forced, tricked, or intimidated into a life of labour and servitude.  For example:
A young person who is forced to work or serve – through fear and threats of violence
A young person owned or controlled by the abuser who uses mental or physical abuse to control them.
A young person is physically constrained or has restrictions placed on his/her freedom of movement

Modern Slavery is linked to Human Trafficking, but not all victims of modern slavery have necessarily been trafficked (or moved).

More information can be found at the NSPCC by clicking here.

Online exploitation is when someone uses their power online over a young person to make them do things either sexual or criminal (either online or offline). It can happen over any of the devices that a young person uses; such as online gaming, social media, messaging and live streaming. It can include:
·       Grooming – Befriending a child and building trust so they can sexually harm them or criminally exploit them.
·        Sexting – manipulating a young person to send or receive messages that are about sex, or live streaming sexual acts
·       Sextortion – Forcing somebody to do something by threatening to publish sexual material about them.
·       Children being encouraged to access adult porn sites.
·       Children being tracked by the people who are exploiting them through apps on their phone.
·       Blackmail into criminal activity
·       Money laundering using young people’s online banking or game accounts.

The Children’s Society have produced a booklet highlighting dangers of online exploitation: 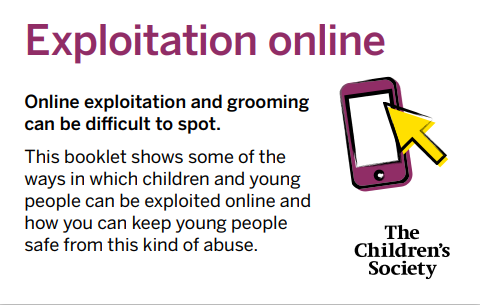 Most people are unaware that perpetrators of exploitation can also be young people aged 18 and under, and often friends (or peers) of the victims of the abuse.
Peer on peer exploitation can happen in schools and in a young person’s friendship groups. While the abuser themselves may also be a victim of exploitation from another adult (or peer) it is important that it is still recognised as exploitation.
Young people can also be encouraged to join gangs which may be linked to organised crime groups.

Children run away from home for a number of reasons, but running away from home places a young person at an increased risk of both criminal and sexual exploitation.
A child who goes missing just once faces the same immediate risks as those who go missing on a regular basis.

The immediate risks associated with going missing include:
No means of support or legitimate income – leading to high risk activities;
Involvement in criminal activities;
Victim of abuse;
Victim of crime, for example through sexual assault and exploitation;
Alcohol/substance misuse;
Deterioration of physical and mental health;
Missing out on schooling; and
Increased vulnerability;
Potential for exploitation.

Catch 22 have produced a poster highlighting some of the reasons (or push and pull factors) why young people run away.

For more information about advice about what to do if a child goes missing visit our Getting Help page.

How does exploitation happen?

We’ve all heard the word before but what does it actually mean?

There are times when we have all ‘groomed’ ourselves to get ready for an event: for example, getting ourselves ready for an evening out. This is what groomers do to young people; they ‘get them ready‘ for exploitation through a complicated and manipulative process which can make it impossible for young people to recognise as abuse until they feel it is too late to tell anyone.

As part of their #Lookcloser campaign; the Children’s society also produced this information on the stages of Grooming. Knowing these signs can help keep people safe from exploitation. More information and resources from the #LookCloser campaign can be found here.