Be Aware Parents and Carers: Signs of exploitation.

What are the signs of exploitation?

Parents and carers are often the first to notice that something is not quite right with their child, but may not recognise this as exploitation. Knowing the signs can help us act as quickly as possible. 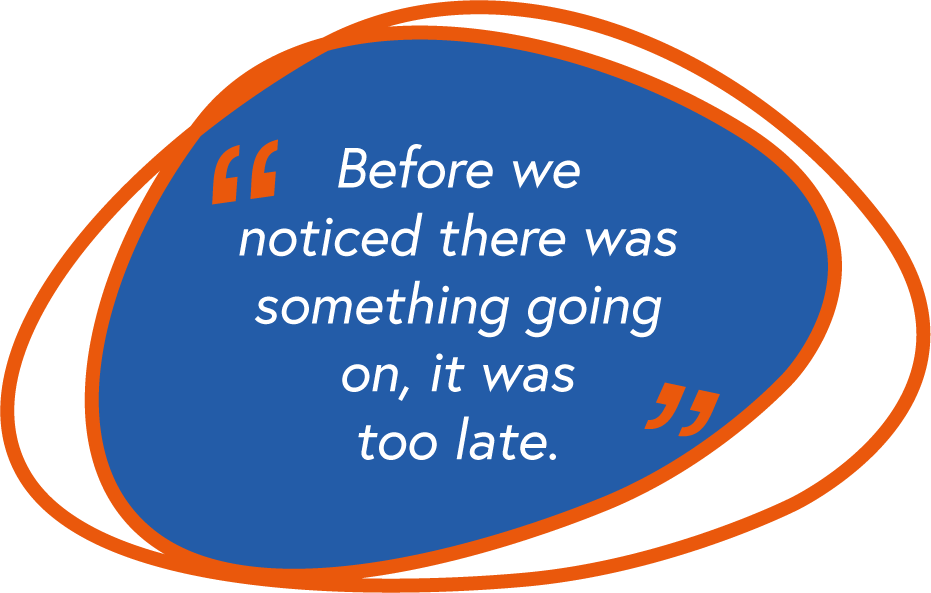 Listen to some parents whose children have been exploited talk about the changes they noticed in their child.

As with any of the signs discussed; they are not definitive or exhaustive. You know your child and if you notice changes in their behaviour, or changes to their relationships (with adults or with their peers) consider whether they may be due to exploitation and seek the necessary support and guidance available.

Criminal exploitation is the process of grooming or manipulating a young person (by giving them things), in exchange for carrying out criminal activities. For example County Lines; which relates to the supply and movement of drugs.

– Returning home late, staying out all night or going missing
– Being found in areas away from home
– Increasing drug use, or being found to have large amounts of drugs on them
– Being secretive about who they are talking to and where they are going
– Unexplained absences from school, college, training or work
– Unexplained money, phone(s), clothes or jewellery
– Increasingly disruptive or aggressive behaviour
– Using sexual, drug-related or violent language you wouldn’t expect them to know
– Coming home with injuries or looking particularly dishevelled
– Having hotel cards or keys to unknown places

Child Sexual Exploitation, often known as CSE can happen in person or online. An abuser will gain a child’s trust through grooming, or control them through violence or blackmail before moving onto sexually abusing them.

When a child is sexually exploited online they might be persuaded or forced to:

Trafficking is where children and young people are tricked, forced or persuaded to be moved or transported and then exploited, forced to work or sold. Trafficking can occur when a child is transported any distance. Children are trafficked for:
– sexual and criminal exploitation
– benefit fraud
– forced marriage
– domestic slavery like cleaning, cooking and childcare
– forced labour in factories or agriculture
– committing crimes, like theft, working on cannabis farms or moving drugs

How do I know if its exploitation and not challenging teenage behaviour?

It is hard to distinguish some of the above signs and behaviours from what can sometimes be deemed as ‘normal’ teenage behaviour.

A recent study by PACE found that 40% of surveyed parents felt unconfident is telling the difference between challenging teenage behaviour and exploitation.

If you notice a number of signs, or a change in the way your child is behaving, and have a feeling that something is wrong then ask yourself; could this be exploitation? Remember, you know your child better than anyone else and if you feel something isn’t right it’s better to seek help earlier and be wrong than wait and find the situation is worse. You won’t be judged and nothing is lost if you are wrong but a lot could be done with early help and support if your concerns are right.

If a young person is showing challenging behaviour or criminality it’s important to look further and beyond the behaviour. Is it possible that they are being exploited and forced to do things they don’t want to do?

It’s important to understand that often when a young person displays some of these challenging behaviours to parents and carers it can be a result of trauma. A young person who is a victim of exploitation will be experiencing trauma (they may have seen or witnessed violence, threats and feel trapped in a situation they feel they cannot get out of) and typical trauma responses are often displayed as difficult and challenging behaviour. This is often done in the home and around the people who are closest to them as this is where they feel safest to release these feelings. For example:

The key to supporting these behaviours is to understand the reasons that a young person is displaying then and to continue to offer support and be available to listen when needed.